There was this Operation Maneater project on PBS last night: presenting in premiere the Polar Bear, one of the three series. The most disturbing scenes were the poor bears eating garbage at the “dump stations” of Northern Canadian Inuit village Arviat (see more in the news).

And then they had these extremely expensive “solutions” of putting bears in ‘jail’ – no, I am not kidding! – and transporting them by helicopter back into the wilderness, far away from the dump site. Should we call this a dumb solution (pun intented)? 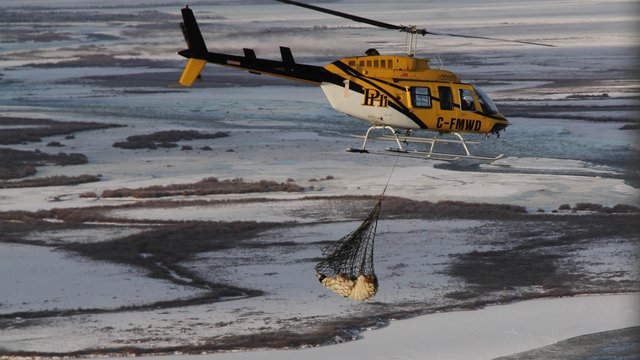 There was a superficial reference to the times when the native Inuit lived in peace for centuries with polar bears… although they were also hunting them as it was needed. It made me think about this: when the Inuit/Eskimos lived the traditional life of hunting and fishing, without our influence on their lives, everything was OK because there was a balance. Like with all peoples that live close to mother nature.

However, today, when they (I mean the Inuit) also eat “civilized” food, i.e. packaged processed food wrapped in plastic (that would be found in the stomach of polar bears) and when they need to have a dump for the disposal of all that garbage that we are accustomed to… it’s time to re-think WTF are humans doing in the polar bear’s territory? Every claim about the romantic dreams of living the “traditional life-style” becomes a joke when you watch these arctic dump sites full of the 21st century’s usual garbage!

My thought of the day: get out of the bears territory and move South if you want the convenience of the “civilization” and let the bears live their life.

Finally, a side note for the bleeding-heart animal lovers. It was scientifically established that the bears eating our garbage in the summer months did not fare better then the bears which followed the eternal cycle of starving and losing weight during in the same period, before the ice comes and they can go hunting for seals. So, no, there is no need to feed the wild animals, they can take care of themselves – just get out of their places…

2 thoughts on “About polar bears…”