Whiskey, Tango, Foxtrot – Saul and his son are coming!

So, last night I was watching the Oscar gala together with our completely uninterested cat. In the “foreign” film category (which means everything that is not made in Hollywood) the winner was Son of Saul, from Hungary. The director, László Nemes Jeles (two last names, although in the English press is know as László Nemes) is a Hungarian Jew. The story is about a Hungarian Jewish guy that becomes a member of the Sonderkommando in a concentration camp. The main character is played by a Hungarian Jew of the Hasidic denomination.

History tells us there were Jews on the territory of royal Hungary since the Dark Middle Ages. That older group slowly became rich and settled in the towns and cities, while in the 19th century a newer group of poor, rural Ashkenazi immigration from Galicia and the Russian Empire increased their number. Interestingly enough, in the Hungarian territories, a strong voluntary assimilation process began, something unseen in other countries. Even a new – more secular and modern – religion was born there, the neolog branch of Judaism. Many of these assimilated Jews become well-known figures in the contemporary literature, arts, theatre, journalism and today are part of the curriculum in the schools.

There is a joke that even Hollywood was founded by Hungarian Jews… which, actually, is only half-joke because there were quite a number of Jews of Hungarian origin at the beginning – and later: Adolf Zukor (Paramount Pictures), William Fox, Michael Curtiz, George Cukor, Bela Lugosi, Zsazsa Gabor, Houdini.

What then happened between the two world wars and during the Holocaust is well known. I am not going to discuss that. I am old enough (born six years after the end of the war) to say that in my childhood I’ve seen survivors in my neighbourhood. My first teacher was a Jewish woman and I saw the first time numbers tattooed on a forearm on her mother… She, the teacher was an extraordinary, devoted person and, probably, she directed me toward writing. I wrote a lot about her in my (coming) book. Then in the high school, one of my sweethearts was a Jewish girl, I just didn’t know she was Jewish, and my late best friend was a very smart and talented little Jew. As I learned today, all my life I was surrounded by Jews… and most of the time I didn’t know it because my parents never taught me to “look for” it. And I am grateful for that even today. 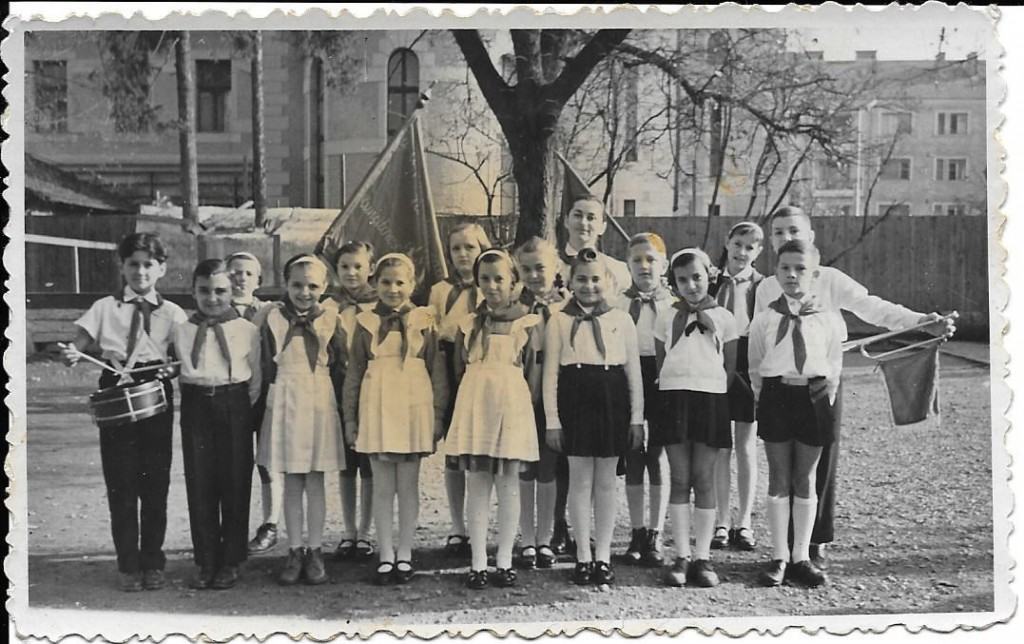 With my first teacher and the group of the first pioneers in my class, around 1960
(pioneers was the communist version of scouts…)

Everything was fine until I moved to Budapest and started to work as a journalist. Less than two years later the communist dictatorships, soft and hard alike, started to crumble and suddenly they were gone. As the tight “iron fist” of the Soviet-type control was over, the traditional divide among the Hungarian “intelligentsia” became very visible. The code names were “urban” and “folk” trends in culture but basically, it was about Jews and non-Jews. Not being taught to care about it, I ended up in a workplace where Jews were, probably, the majority… and it happened to be one of the best periods in my adult life. Ironically, the other happened to be among Muslims, in Chechnya – but that’s a different story. While working in the Hungarian media I was told a few times that I’ve sold my soul to the Jews…


I left Hungary and Eastern Europe behind almost 20 years ago. And I am happy I did. That divide and adversity now are holding captive the whole country. The left and right political stance is also muddled with this Jews and non-Jews craziness fed covertly (sometimes not-so-covertly) by the ruling establishment. The “defenders” of the nation, the true Magyars, the traditional conservative right, as they like to tag themselves, are on one side. On the present government side, by the way. They are not Jews. On the other side – according to them are the leftist, ex-communist, Jewish cosmopolites, the anti-Magyars. And their mongrel servants.

Hate is the common language they speak on both sides.

Now here comes a young Hungarian Jew and makes a film about the Holocaust. Or related to the Holocaust, as I read about it, raising very serious moral issues, for example about the collaboration with the evil power. A very sensitive subject in Eastern Europe, considering all those oppressive regimes of different shades of the past centuries…

Even before the Golden Globe and Oscar and international recognition the right in Hungary was up in arms: why this subject? Why a film about a “Jewish problem”? Why not a film about Trianon, the greatest Hungarian tragedy? Which means, for the true Hungarians, the nationalist (kind of chauvinistic type of nationalist) Magyars, this was not “our” film. It was “their” movie. A Jewish movie made by a Hungarian Jew, sponsored (financially) by the Hungarian Film Fund – horror: Magyar taxpayers’ money. “Our” money spent on “their” movie! Unfortunately, the young and seemingly sensitive – and paranoid – director reacted to the lowlife critics in the worst possible way: attacking Hungary, attacking a Jewish newspaper in Germany that interviewed him, attacking the New York Times and anybody that dared to say anything about the film. It didn’t help getting likes among Hungarians.

Last night, at the Oscars, he thanked Hungary for financing the film – which was a big surprise. At least for me.

In Romania, where I was born there is that historical region called Transilvania… which used to be Hungary till the end of WWI, till Trianon. A considerable number of Hungarians still live there, for the greatest sorrow of the diehard Romanian nationalists, who would prefer an ethnically clean, pure Romanian Romania. Those Transylvanian Hungarians have 6-7 theatres that present shows in Hungarian language with (local) Hungarian actors. The oldest such theatre exists in my hometown since 1792. That’s the year when a certain Captain George Vancouver arrived at the shores where the city bearing his name stands.

A talented actor of this Hungarian Theatre from Kolozsvár (the city is known as Cluj in Romanian; Klausenburg in German and as Kloiznburg in Yiddish), by the name Levente Molnár, happened to play an important role in the film. Not the main role but listed second in all cast lists. So, just as a reminder: this is a Hungarian man, born in Romania, playing in a film made in Hungary by a Hungarian Jew.

Hungarians from Romania usually are depicted in the Romanian media as the ungrateful, always dissatisfied minority, demanding “additional” rights and potential enemies of the ideal, ethnically clean beautiful Romania… Unless they make an international achievement – in arts or sport or science. Then suddenly they become “our Romanians” for the media, and the bragging begins.

So, this morning, I woke up to see Romanian headlines like “Forget DiCaprio… A Romanian actor got Oscar last night!” Overnight, this poor guy, the very good Hungarian actor from Transylvania, and a very modest man has been transformed into the Romanian who got the Oscar. None of the actors of the film got any Oscar… The film en-bloc was nominated and awarded last night and the Oscar was handed to the director.

This is just a small example showing the extent of the mental exercise we go through when somebody knowing that I have something to do with Hungarians… tells me: Oh, I saw a Hungarian movie got the Oscar, you must be —- and here comes the Whiskey, Tango, Foxtrot. How should I be? What should I be? Why should I be anything…? – I just want to watch a movie. The tentacles of Eastern Europe are longer than we ever thought…

P.S. I didn’t watch the movie yet.

One thought on “Whiskey, Tango, Foxtrot – Saul and his son are coming!”